Book of the Week #19: Inside Out by Maria V. Snyder

February 13, 2011
I love dystopian novels, they're awesome. I love the idea that the future isn't definite, and though there are many stories about how the future is amazing, and better than now, I love how it could also turn out to be worse, even though I'd rather it actually did turn out to be awesome :L So, this week I chose Inside Out by Maria V. Snyder, which is about a girl called Trella who lives in a place called Inside, and she leads a revolution to try and make Inside a better place. It is such a good story and so unique, so I decided to make it this week's book of the week. =] 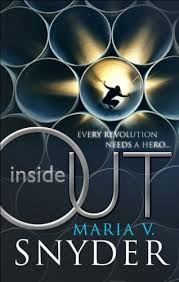 Title: Inside Out
Author: Maria V. Snyder
Publication Date: January 2011 (UK)
When I Read It: January 2011
Synopsis:
Keep Your Head Down.
Don't Get Noticed.
Or Else.

I'm Trella. I'm a scrub. A nobody. One of thousands who work the lower levels, keeping Inside clean for the Uppers. I've got one friend, do my job and try to avoid the Pop Cops. So what if I occasionally use the pipes to sneak around the Upper levels? The only neck at risk is my own…until I accidentally start a rebellion and become the go-to girl to lead a revolution. - from Goodreads.com
Recommended if: You love dystopian, or if you're looking for something completely new and different to everything else.
Ages: 10+
My Review: http://cheezyfeetbooks.blogspot.com/2011/01/book-review-inside-out-by-maria-v.html