February 04, 2013
Hey! So, on 3rd February 2013, I went to #TFIOSlive, which was John Green's UK tour to celebrate the release of The Fault In Our Stars in the UK. It was awesome, as expected, and I just thought I'd do a quick write-up! 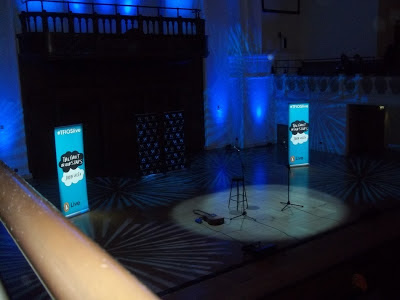 My seat was in the gallery, so I had a pretty good view of everything that went on on the stage. It started with John Green introducing The Fault In Our Stars by telling us a little bit about it and how his work in a children's hospital inspired him, but it took years and years to make it into the story that it is today. He told us about a nerdfighter called Esther Earl, who, although the story isn't about her and Hazel isn't her, had a big influence on the way that he wrote the book. Then he read the first couple of pages of the book, before introducing his brother, Hank, to the stage.

Hank sang a couple of his songs, starting with Strange Charm. He sang a couple more, including Accio Deathly Hallows which was awesome because that was requested by a nerdfighter in the audience and he wasn't originally going to sing it, and it's one of my favourites so I was hoping he would. Then John came back out onto the stage to answer some questions that the audience got the opportunity to write down before the show started. I didn't write one because I couldn't think of any, but there were some really good ones! Some were about the book, some were about other things, and it was all really interesting. He then left the stage for Hank to sing some songs.

He sang the ice cream chords song/commentary, which was awesome (if you've not heard that one you should definitely look it up on YouTube here, it's fab) and also a song he wrote about The Fault In Our Stars which I've not heard before but definitely am looking forward to hearing again! Then John came out again and also introduced Maureen Johnson, who came out to ask some more of the audience's questions. They timed the questions, so that whoever was holding the microphone at the end of the time lost, and John won, meaning he had to hit Hank in the face as punishment (if either of them went over their allotted times, they had to be punished, like in their videos), and so that was fun to watch (that sounds horrid, but hey... :P ) 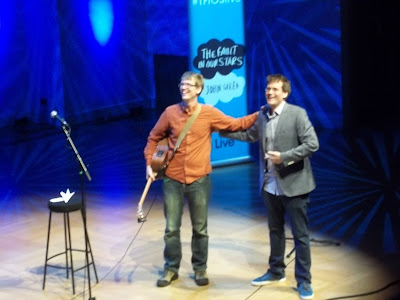 Then, Hank played some more songs, including A Song About An Anglerfish, which I absolutely love, and John thanked us for coming and for reading and loving The Fault In Our Stars and we whooped and cheered and clapped and it was incredible. Then, the last thing was they came out for an encore, and as, when they first started making their videos, a lot of people confused them for The Proclaimers, they decided to sing 500 Miles and get all 900 nerdfighters in the concert hall to sing along. It was great fun, and I think I will forever have 'And I would walk 500 miles!' stuck in my head. It's so worth it though.

After the show there was an opportunity to meet the brothers and get our books signed, and as we were in the gallery we were very lucky to get to go first! It was very very quick as there were so many of us to get through, and there were no pictures and no dedications, but it was so awesome to get to meet them both, even if I was incredibly awkward and I couldn't say anything that was understandable... Still! I'm now a proud owner of signed and Hanklerfish-ed copies of a TFIOS hardback and a UK paperback, Let It Snow and An Abundance of Katherines. I also bought myself a tour t-shirt which is TFIOS blue (sort of) and super awesome. 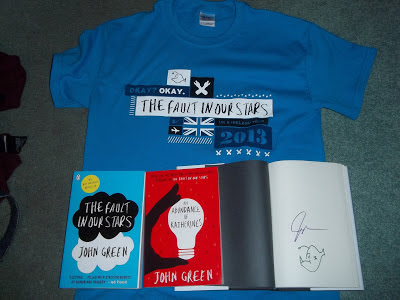 So yeah... That's it in a nutshell! It all flew by so quickly and it was so freaking awesome that I just want to do it all over again! I loved the songs, I loved the questions, I loved the signing,... All of it! I can't wait until they come back (which hopefully they will soon) because it was honestly the best event I've ever been to, bookish or otherwise. Amazing! Truly. If you've not read The Fault In Our Stars yet (seriously, why not?!) you can read my review here and you can (and definitely should) buy it from these places:

Don't know who John and Hank Green are? *gasp* Anyway, they are the Vlogbrothers on YouTube, and John is the author of many YA books, including (obviously) The Fault In Our Stars, but also Looking For Alaska, An Abundance of Katherines, Paper Towns, and he is also the co-writer of Let It Snow and Will Grayson, Will Grayson.