May 23, 2014
Hey guys! Today I have an exciting cover reveal and extract from Memoirs of a Neurotic Zombie by Jeff Norton! It comes out early August. It looks great and so funny - I was lucky enough to hear Jeff read an extract himself earlier this year and everyone present was in fits of giggles. So, without further ado here's the awesome cover, the synopsis, and a short extract! 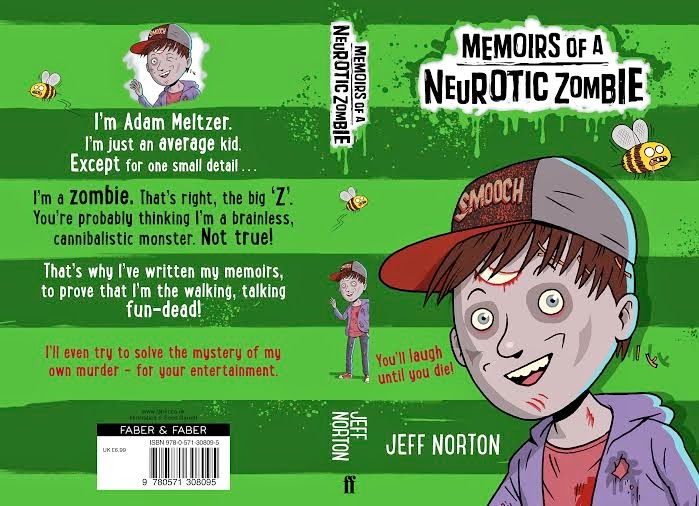 Synopsis:
'My name is Adam Meltzer and the last thing I remember was being stung by a bee while swinging at a robot-shaped piñata on my twelfth birthday. I was dead before the candy hit the ground.'

Memoirs of a Neurotic Zombie is narrated by the hilarious Adam Meltzer - pre-teen, worrywart, and now zombie. Adam's family gets the fright of their lives when he turns up at their door desperate for a shower . . . three months after his funeral.
When most people think zombies, they think of eating people, and unintelligent monsters.
But Adam doesn’t like germs. Or dirt. Or things being disorganised. So waking up as a zombie was definitely not in his plans, and the idea of eating people is disgusting. Getting stung by a bee doesn’t normally lead to becoming a zombie, and it seems incredibly unfair that it’s happened to Adam.
Soon Adam's back at school trying to fit in and not draw extra attention to himself, but when he sees his neighbour Ernesto transform into a chupacubra, and the beautiful Corina (Adam's number one mega-crush) turns out to be a (vegan) vampire, undead life is never going to be the same again.

A hilarious adventure caper - if Ferris Bueller met Shaun of the Dead - all about friendship and being yourself . . . even if you're undead.

Extract:
Adam voluntarily goes back to school, hiding his decomposition:

14. As I walked down the school hallway, a strange hush fell over the students as they parted for me; staring and whispering. Seventh grade was the middle grade of middle school, so I was used to being basically invisible. But everyone slowed down and stared at me as I strolled to my first class. I felt really exposed, walking through a cloud of gossip:
Is that Adam Meltzer?
I thought he died.
His hair looks better, smoother
What’s he doing back?
Is he into make-up now?
What’s the big deal? I was just a kid back from the grace. Granted, a kid with too much rouge on his cheeks.
Is that Amanda’s little brother?
I hear he’s been touring with SMOOCH.
Before death, I’d been an anonymous seventh grader, now I was part of the rumour mill. I wondered if this is how the popular kids felt all the time.
But I didn’t have time to bask in my newfound fame because suddenly I was yanked into a classroom.
‘What are you doing here, you moron?’ asked Corina, closing the door or the empty history classroom. After Saturday night, I was hoping for a secret handshake, or at the very least a polite nod.

17 other blogs around the blogosphere have also revealed the cover, but each with a different extract - just head on over to Twitter to find the links. Go to A Day Dreamer's Thoughts for the extract preceding mine, and to Bookbabblers for the one after (they run in order but they don't follow directly on from each other). Do stop by them to read more of the novel, because they're all great (I've had an early look) and the whole book looks absolutely fantastic, so don't forget to look out for it in August! Thanks for reading and I hope you enjoyed it!