October 22, 2011
In My Mailbox is hosted by Kristi at The Story Siren.

Once again, this week, the sound in my video is awful. And the lighting's pretty rubbish too... I did my best, it's just I use the camera on my laptop and let's be honest, laptop webcams are not great. Anyway, I've listed the books underneath and typed out all the important bits that I say, just in case you can't watch it ;)

Gifted:
Anna and the French Kiss by Stephanie Perkins
Sweetly by Jackson Pearce

(Thanks to my parents for these birthday presents! Have read them both and they were AMAZING and I wanted finished HB copies)

For Review:
After Obsession by Carrie Jones and Steven E. Wedel
Footloose by Ruby Josephs

(Thanks to Bloomsbury for both of these!)

Then I showed 4 books that I got signed this week:

Crescendo and Silence by Becca Fitzpatrick - I went to a signing in Foyles and she signed these for me :)
The Name of the Star by Maureen Johnson - I also went to a different signing and got this signed, which is also where I got...
City of Bones by Cassandra Clare - Cassie was a special guest at the Maureen Johnson signing, and I happened* to have my copy of CoB with me... ;)

*When I say happened... I mean, I took it because I knew she was going to be there and I thought I could sneak it to her to sign for me ;) And because she's a nice person, she did! :D 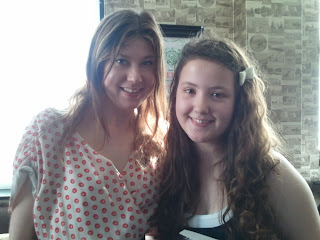 Haha, this is me with Maureen Johnson :) Cheesy grin! ;) It was such a good event! I met Cicely from Cicely Loves Books and her mum for the second time this week (and ever) and they were SO nice, and Maureen of course was awesome too :D And I met Becca Fitzpatrick for the second time this week too, where again I met Cicely and her mum... I do have pictures but not uploaded onto this computer ;) Overall though, great week for bookish things! :D


Anyway, I think I had a pretty good week this week! Let me know what you got in your mailbox this week - leave me a link in the comments! Hope you have a great week - I'm off on holiday** :)

**Which is why I might not be posting anything this week... Because we're going away and I have NO IDEA if there'll be any internet or signal at all there... I tried to get things scheduled and written beforehand, but I got distracted and haven't written anything... Completely my fault, of course! So if there's nothing posted, that's why! Anyway, thanks for stopping by!