January 29, 2012
Hey everyone, welcome to this month's In My Mailbox! I've decided I'm only going to do an IMM every month (I may change my mind yet again about this later - but I'm feeling rather lazy lately and some weeks I don't get many books so there's no point in a whole post about it so at the end of every month it is ;P ) instead of every week :) So, here's what I got since the last IMM (which was halfway through Jan, so this is the last hal of January instead of all of Jan ;) ) Anyway, I shall stop blabbering on now, and get onto the books! 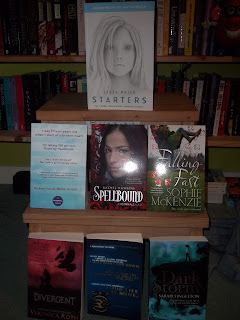 Me and Earl and the Dying Girl by Jesse Andrews (ABRAMS, March 1st 2012)
Lies Beneath by Anne Greenwood Brown (Delacorte BFYR, June 12th 2012)


*New cover - I've already read this, I read it last year when it first came out with the old cover (the same as the US one) but the UK copy has a new cover that will match the UK cover of the sequel, Insurgent, so we were kindly offered a copy by the lovely Rosi at HarperCollins if we wanted a matching series :D Thanks Rosi!

So that's what I've received in the last couple of weeks, how about you? I'm most excited to read Starters, Me and Earl and the Dying Girl and The Catastropic History of You and Me, but they all look AWESOME :D Leave me a link to your IMM in the comments and I'll come and check out all your lovely new books! :D

Thanks to Simon and Schuster, Random House, netGalley, HarperCollins, Penguin, ABRAMS, Delacorte Books For Young Readers and Putnam for everything I received this month!