Title: Debutantes
Author: Cora Harrison
Series: N/A
Pages:  320
Publisher: MacMillan Children's Books
Date of Publication: 2nd August 2012
Source: Publisher*
Synopsis from Goodreads: It’s 1923 and London is a whirl of jazz, dancing and parties. Violet, Daisy, Poppy and Rose Derrington are desperate to be part of it, but stuck in an enormous crumbling house in the country, with no money and no fashionable dresses, the excitement seems a lifetime away.

Luckily the girls each have a plan for escaping their humdrum country life: Rose wants to be a novelist, Poppy a jazz musician and Daisy a famous film director. Violet, however, has only one ambition: to become the perfect Debutante, so that she can go to London and catch the eye of Prince George, the most eligible bachelor in the country.

But a house as big and old as Beech Grove Manor hides many secrets, and Daisy is about to uncover one so huge it could ruin all their plans—ruin everything—forever.


My Thoughts:
Before I say anything else, isn't that cover just GORGEOUS? I love it :D *stares*

*recovers self* Anyway, I'll get started properly now. I haven't read a historical book for a good 5 months now, so I was really looking forward to reading Debutantes. I've only read one book set in the 1920s, but that was set in America, and knowing very little about the time period, I didn't know how society differed from country to country. And it would seem that it is very different, so don't expect that it will be like Vixen by Jillian Larkin, as I expected it to be. It's more sophisticated, very British, and a whole lot calmer.

The story follows four sisters and their quest to give Violet, the eldest, the season she deserves to be the best debutante she can be. Again, I know very little about becoming a debutante (all my knowledge comes from Gossip Girl, I must admit) but I figured it's a pretty vital part of girl's life if they wish to marry into a wealthy family and save her own from bankruptcy. I liked how while the story was mainly told from Daisy's point of view despite being in third person, we got to learn about each character and their traits and interests as we went along.

I really liked Daisy. She's described as the plainest of the three eldest sisters, and because of that I felt I could relate to her. I find it difficult to connect to characters who are described to have incredible beauty, because more often than not in real life, that isn't the case, in my opinion. Sorry! ;P She was the most down-to-earth of the sisters, I think - Violet seemed a little too obsessed with becoming a debutante that at times I thought she was selfish, Poppy was so engrossed in her music that I couldn't really decide what I thought of her and Rose was cute and she wants to be a writer, but while reading I kept having to remind myself that she was only twelve, because she really did seem older.

The plot was nice and solid - it was simple but still interesting. There was a mystery element which was really well done, and it helped to bring the book to a closed finish at the end, so I was left with no unanswered questions at the end, which is always nice. There's nothing worse than finishing a book and then wondering what on earth happened to someone, or something, etc! It was also great that the girls got to go and live with a wealthy family for a while - it meant we could really see the difference between having money and not having money in 1920s England.

I think my favourite part of the book was everything about Daisy's film-making. It was so interesting! Whether the trip to the film studio is based on fact or fiction, I found it really exciting and it was really awesome to learn about all the steps that are needed to produce a film. It was nice to learn a little about silent films to, and I liked how Daisy filmed some of the important events in the book and because she added them to her film, we got to see them through the camera's eyes, rather than just the characters'.

Overall, I really enjoyed reading Debutantes, and it's got me all excited about historical fiction again. I'd recommend to fans of historicals, or anyone looking to read a good YA about family and friendship, with a little element of mystery thrown in to stir things up. I'll definitely be looking out for anything Cora Harrison writes in the future, and will be getting myself copies of her previous two books so I can read those too.

*Huge thanks to MacMillan for sending me this in exchange for an honest review! In no way has this affected my opinion of the book.


I'm on the blog tour for this book! It's my stop today and you can go and read my guest post from Cora herself - it's all about Daisy! You can read that here. (I will link once it's posted - if it's not linked yet, it's just the next post up!) Also, make sure you let me know in the comments what you thought of this book, if you've read it, or if you haven't read it, if you'd like to! Lastly, remember to check out all the other stops on the tour and thanks for reading! 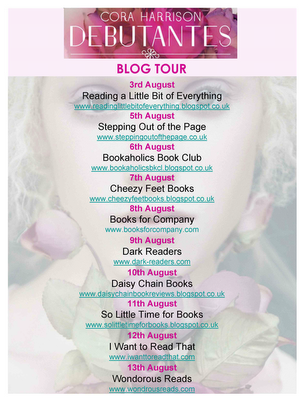