November 24, 2011
On Wednesday, I was lucky enough to attend the ATOM blogger party 2011! It was my second blogger event, and it was great fun :) I thought I'd share a little about what happened.


I got the train up to London with Rhys from Thirst for Fiction, and then we had to get the tube from St. Pancras to Temple, which was 11 stops! It wasn't so bad though, luckily, and we were only 15(ish) minutes late, which wasn't that bad... ;)

We walked into the building for the Little, Brown Book Group, and it is seriously cool. It's big and open and it had huge 'space trumpet' sculptures hanging from the ceiling, which we were later told moved every hour, on the hour, though I didn't notice them moving. Anyway, we got out visitor badges and then we were sent up to the second floor, and that's where we met all the other bloggers!

For the first half an hour or so we mingled around, and there was a tuck shop that had cute little sandwiches and cakes, and around the room there were books laid out that were just there for the taking! I helped myself to a few, (which I will of course review) and then we were taken into a meeting room, where they told us about all the awesome new releases that will be coming out next year.

I'm most looking forward to read Under the Never Sky by Veronica Rossi, Bunheads by Sophie Flack and 172 Hours on the Moon by Johan Harstad (which we got proofs of and it looks AMAZING)! They also talked about a new range of titles aimed at 8-12 year olds, which looked really cute.

There were two authors at the event, CJ Daugherty, author of Night School, and Sarra Manning, author of upcoming Adorkable, and other books such as Nobody's Girl, and Guitar Girl. They both talked briefly about their books, and they both sound great.

After that we went back out to the room with all the books and food and mingled and chatted some more. During the evening I talked to Stacey from The Pretty Books, who I had previously met at the Daughter of Smoke and Bone event run by Hodder in October, and I also met Jo from Once Upon A Bookcase for the first time and I had a great time chatting to them.

Then, as other bloggers started to leave, it ended up with it just being me, Rhys, Andy from The Pewter Wolf, Matt (@mattlibrarian), and the publicists from Atom, and they very kindly showed us around their offices! It was so cool to see all the separate parts of the imprint, from publicity to design, and we even saw where they pack all their books to send out to us bloggers! 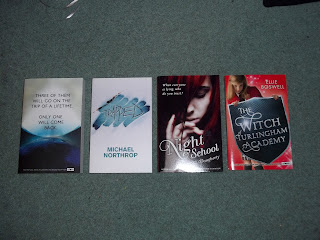 After that it really was time to go, and it was so sad... Even though we had to speed walk and run (I don't run. Ever. ;P) through St. Pancras and we literally only just made it onto the train in time (like, we got on, they closed the doors and the train started moving), it was an awesome evening and I can't wait to read all the great books I received. I'd just like to say a HUGE thank you to the lovely people at Atom who ran the evening, as it truly was great fun!