Hey everyone, welcome to my stop on the Someone Else's Life blog tour! I have for you today an awesome guest blog from the author, Katie Dale - A Fact or Fiction post!

A lot of things that have happened in my life have somehow made their way into my debut novel, Someone Else's Life. But can you guess which ones... ?


Which of these statements do you think are FACTS and which are pure FICTION... ?


Answers below - no peeking!

1) Just like Rosie in Someone Else’s Life, my mum made me a gingerbread house birthday cake when I was little.
2) The incident where Trudie blew up a pressure cooker and had to scrape mashed potato off the ceiling actually happened to me!
3) Just like Rosie, I used to live in Bramberley, in Sussex.
4) Just like Kitty, I trained as an actress and played Titania in A Midsummer Night’s Dream.
5) There really is a Woody’s Plaice in Provincetown, New England.

So have you decided which ones you think are fact and which ones are fiction? Read on to find the answers!
__________

1) FACT! It was absolutely amazing, and the best birthday cake ever! 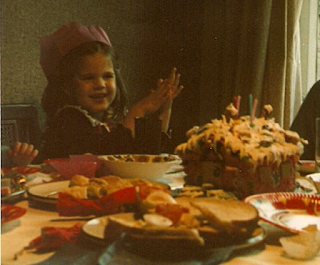 2) FACT! I was staying with some friends in Australia and wanted to thank them for having me to stay by cooking them a meal. But when I tried to boil the potatoes I used what I thought was a saucepan – but it turned out to be a pressure-cooker! I really struggled to get the lid off, and when it finally did – BOOM! Mashed potato everywhere!
3) Partly Factual... Bramberley doesn’t actually exist, but I made it up out of the names of two pretty villages near where I lived in West Sussex – Bramber and Amberley.
4) Partly Factual... I did train as an actress – I went to Mountview drama school after university – but I have never played Titania. I did spend a summer playing Juliet in an open-air production of Romeo and Juliet though – and it RAINED! Brr!
5) FICTION. There are some great fish restaurants in Provincetown, but no Woody’s – as yet…
6) FICTION. I don’t have a daughter. But my other half’s surname is Woods so technically I could have a daughter called Holly Woods someday!
7) FACT! I only discovered it after I started writing. I knew I wanted to write about a girl who’d been switched at birth but I needed a compelling reason for her to find out about the switch. So I started researching genetic illnesses and came across Huntington’s disease – a fatal degenerative neural condition, with symptoms including memory loss, uncontrollable jerky movements, and loss of motor skills, which only affects people in later life, and children whose parents have it have a 50 per cent chance of inheriting it and can take a test when they’re 18.
This got me thinking – would I want to know? It’d be wonderful to get the all-clear, but if it was positive you’d always know what your future held in store. Would I really want to know?
Would you?
Huntington’s disease consequently became a much bigger part of my story, and part of the proceeds from the book are being donated to help people affected by Huntington’s.
8) FACT! Every year, local fisherman Julian Popko and his family erect the massive tree from lobster pots and red bows and plastic lobsters – crazy!

9) FACT! I was totally gutted. I had wanted to play Mary in the nativity for YEARS (the acting bug bit early on!) but the role always went to the vicar’s daughter- then one year they finally picked me! Then my teeth fell out and it showed in all the pictures. GUTTED.
10) FICTION. My mum is a children’s book author, though, and inspired my love of books from an early age, and is still the first person I show all my writing to. :)

Thanks very much Katie - that was great!
I hope you all enjoyed this post, and that if you haven't read Someone Else's Life yet, you definitely want to now! You can read my review here, and visit the other stops on the blog tour as they are posted here:

You can also read a short sneek peak here!

Someone Else's Life is published by Simon and Schuster UK on February 2nd 2012, and by Delacorte Press USA and Doubleday Canada on February 14th.

Buy the book: UK | US | Canada | The Book Depository

And finally, here's the awesome trailer for this awesome book!