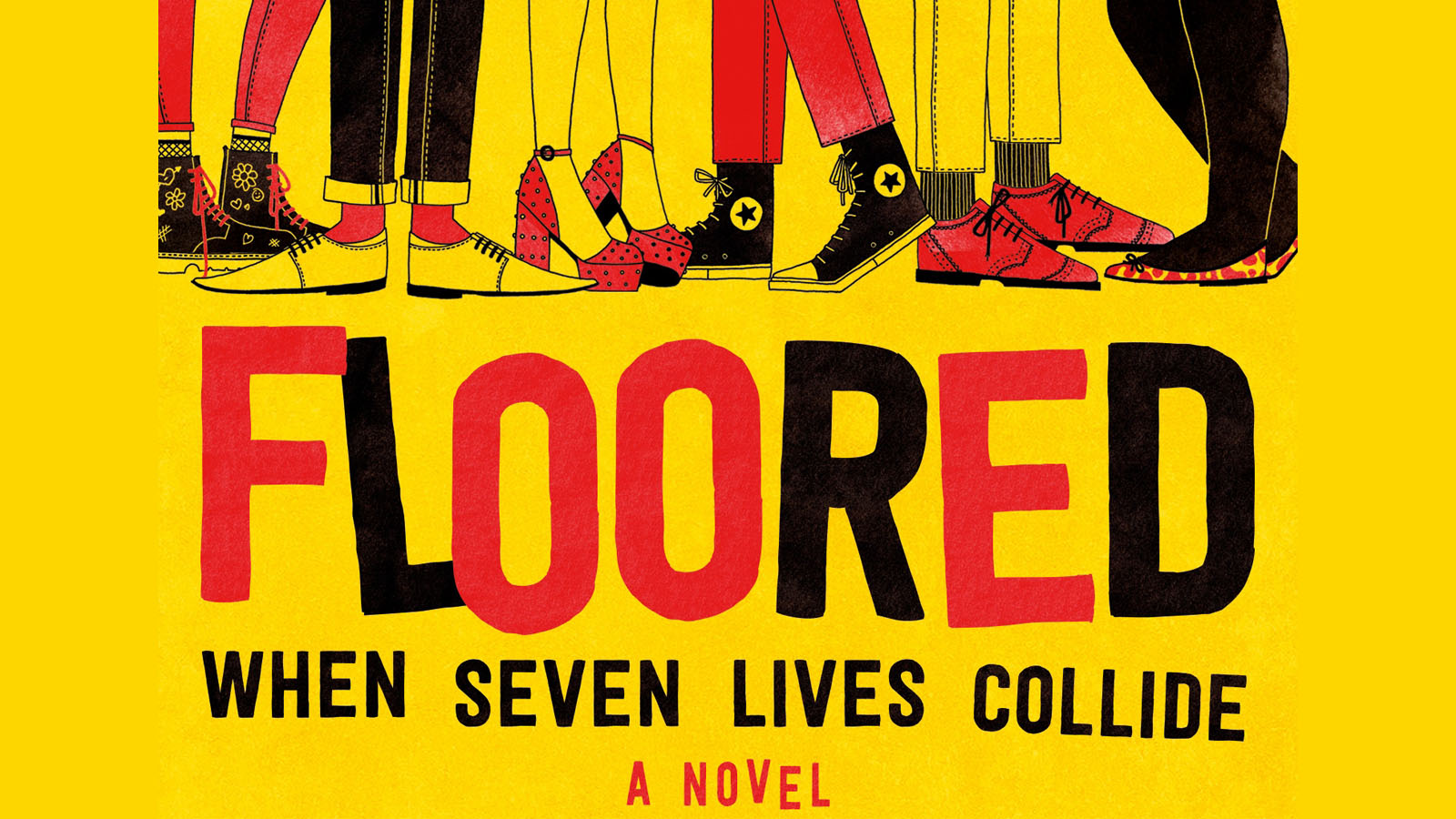 Today I have a review for one of the biggest titles at YALC this year. 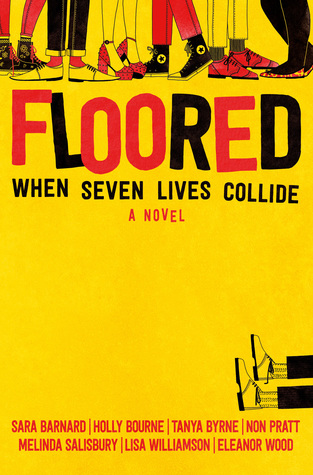 Title: Floored
Author: Sara Barnard, Holly Bourne, Tanya Byrne, Non Pratt, Melinda Salisbury, Lisa Williamson, and Eleanor Wood
Series:  n/a
Pages:  320
Publisher: Macmillan
Date of Publication: 12th July, 2018
Synopsis from Goodreads: When they got in the lift, they were strangers (though didn't that guy used to be on TV?): Sasha, who is desperately trying to deliver a parcel; Hugo, who knows he's the best-looking guy in the lift and is eyeing up Velvet, who knows what that look means when you hear her name and it doesn't match the way she looks, or the way she talks; Dawson, who was on TV, but isn't as good-looking as he was a few years ago and is desperately hoping no one recognizes him; Kaitlyn, who's losing her sight but won't admit it, and who used to have a poster of Dawson on her bedroom wall, and Joe, who shouldn't be here at all, but who wants to be here the most.

And one more person, who will bring them together again on the same day every year.


My Thoughts:
I was super duper excited for Floored, ever since they first announced it about a year (or whenever it was) ago. I have read and loved books by Holly Bourne, Tanya Byrne, Sara Barnard and Non Pratt, and heard only good things about Melinda Salisbury, Lisa Williamson, and Eleanor Wood. The idea of them all coming together to write a collab novel was so interesting and I really had high hopes, and I think that the authors did a great job.

The book follows 7 characters who all find themselves in a lift at once, and something happens to change their lives. This day is told from the point of view of each of the characters, and then the rest of the book is told in the same way - 7 different perspectives of the anniversary of that day every year for the next six years, if that makes sense. It sounds a bit confusing described like that, but it makes a lot of sense when you're reading, so don't worry too much.

I liked the seven different characters, and I really liked trying to guess which author wrote which character, even though I was 100% wrong (it was revealed at YALC this weekend). Even though it was 7 different authors, I did occasionally find it difficult to differentiate between the characters. Maybe because I felt like I didn't get to know them well enough? That one day at the beginning wasn't enough for me to really connect with them, so I found it difficult to get to know them through the rest of the book. There were so many perspectives and I did find it a little overwhelming sometimes - but that's to be expected with the whole premise I think!

Having said all that, I did enjoy the reading experience, and I read a lot of it very quickly. Also, other than the incident in the beginning in the lift that brings them together, not too much actually happens and it's all very normal and everyday, which I think, at this moment in my life, is not what I'm in the mood for - but I know that for a lot of people this is their jam! I'm at a weird point where I've just graduated and I haven't got any plans for the future, and so my reading tastes have changed to reflect that - I need something a bit more plot-y, I think, to keep my mind a bit more occupied (sorry pals). And I think it's just an unfortunate coincidence that this is where I am when I read this book, if that makes sense.

I did like the characters though, and I enjoyed seeing them grow in the snippets of their lives that we do get to see. I found Hugo to be really interesting, his story arc was probably my favourite even though he is extremely unlikeable at first (and tbh, pretty much all the way through). I liked Sasha and Kaitlyn a lot as well, and I did think that all of the characters and the issues they encountered while growing up were very relatable. In terms of realistic, every-day young adult fiction, it does it really well and all the different characters will give a little something for everyone to relate to, I'm sure.

Floored was born from a really interesting idea, and I think that it was executed really well, but it just missed the spot for me. I definitely still recommend it though, especially if you're into character-driven novels! I also loved all the promo at YALC and guessing who wrote each character, and am very happy (and amazed) to report that I was part of the winning quiz team at the Floored pub quiz book launch! Here's a picture of us all looking fairly astounded and amazed! 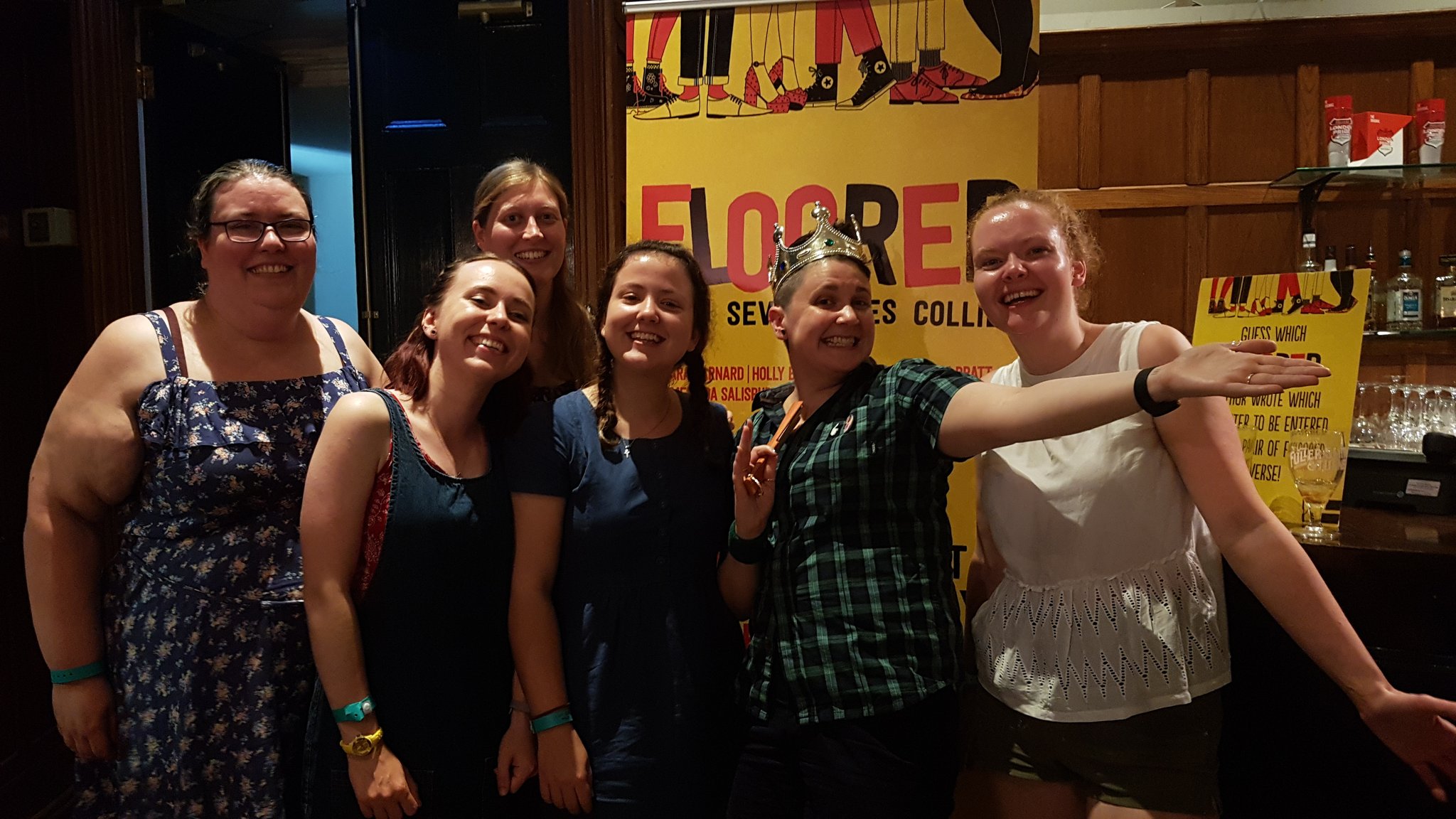 Team Non the Wiser for the win!


What did you think of Floored? Did you manage to guess which author wrote which character? Leave me a comment below!