February 03, 2013
Hello! Letterbox Love is hosted by Lynsey over at Narratively Speaking, and it showscases everything we've received in the last week. Mine's for a few weeks though, because I've been lazy, again :P Anyway, onto the books! (Also, really sorry it's really late! My camera wouldn't work and I've been out all day (more details at the bottom)) 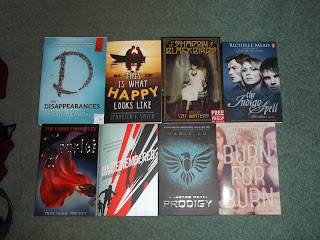 Prodigy by Marie Lu
This is the sequel to Legend, which came out last year. I really enjoyed Legend, so I'm looking forward to reading this! Thanks to Penguin for this! Released.

Scarlet by Marissa Meyer
Again, thanks to Penguin for this one! It's the sequel to Cinder, which is about cyborgs, and I read and loved it in the summer last year so I'm super excited to get to this one! Out February.

The Indigo Spell by Richelle Mead
AHHH! Reading this one now and it's as awesome as ever. I LOVE Richelle Mead's YA books so much... Anyway, this is the third book in the Bloodlines series, which is a spin-off to the Vampire Academy series. I definitely recommend you read these books if you haven't already, they're brilliant! Thanks to Penguin again for this one! Release February.

This Is What Happy Looks Like by Jennifer E. Smith
This is the second book from Jennifer E. Smith, and I really enjoyed her first one, The Statistical Probability of Love At First Sight, so I'm definitely looking forward to giving this one a read! Thanks Headline! Released April.

In The Shadow of Blackbirds by Cat Winters
I've seen this on several other bloggers' Letterbox Loves and I loved the sound of it, so I cheekily requested a copy for myself. I can't wait - it sounds awesome! Thanks to Abrams and Chronicle for this one. Release April.

Burn For Burn by Jenny Han and Siobhan Vivian
SO EXCITED for this one! It's going to be awesome, I think! I loved Jenny Han's Summer series, and although I haven't read any of Siobhan Vivian's books, I've heard some great things about them! Thanks to Simon & Schuster! Released February.

Unremembered by Jessica Brody
I don't really know too much about this one but from the synopsis it sounded pretty good so I thought I'd request it and see what it was all about. I'm looking forward to reading it! Have any of you read it? Thanks to Macmillan! Released February.

The Disappearances by Gemma Malley
I wasn't sure about the first in this series, so I'm interested to see what this one is like. I'll check out other bloggers' reviews and then see what they say, so if you've read it and you liked it better than the first one, let me know! Thanks to Hodder for this one. Released April. (Also, if you can't remember what happened in the first book, I will be posting an Happily Ever Ending for The Killables sometime this week or next! Don't know what that is? Click here.)


JOHN GREEN - THE FAULT IN OUR STARS UK TOUR 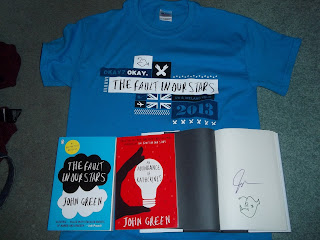 Okay, so today I went to an awesome event... It was John Green's UK The tour with special guest, Hank Green for The Fault In Our Stars! It was so freaking awesome and I had so much fun! I got this t-shirt, and I bought An Abundance of Katherines especially, and I also got a signed and Hanklerfish-ed UK paperback of The Fault In Our Stars! I took my hardback of TFIOS, and Let It Snow too to get signed and Hanklerfish-ed, and I've taken a picture for you all to see above! Did anyone go, or went to the Swindon show or going to another one this week? Let me know! I couldn't take pictures with them, or get my books personalised, but it was the best day ever, I can't wait until they come back to the UK because I just want to do it all again! :D

I'm hoping to do a write-up of the event sometime this week, so look out for that (although it's entirely possible that I won't bother, because I'm lazy and also have a busy week coming up!)

Thanks for reading! Let me know what you got in your letterbox this week in the comments, or let me know which one of these you think I should read first! Happy reading everyone!