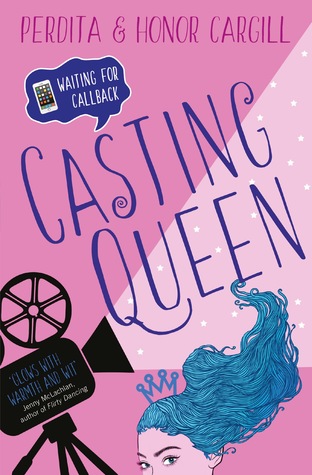 Title: Casting Queen
Author: Perdita and Honor Cargill
Series:  Waiting For Callback, #1
Pages: 346
Publisher: Simon and Schuster Children's Books
Date of Publication: 28th January, 2016
Source: Publisher for review*
Synopsis from Goodreads: When Elektra is discovered by an acting agent, she imagines Oscar glory can't be far away, but instead lurches from one cringe-worthy moment to the next! Just how many times can you be rejected for the part of 'Dead Girl Number Three' without losing hope? And who knew that actors were actually supposed to be multi-lingual, play seven instruments and be trained in a variety of circus skills?

Off-stage things aren't going well either - she's fallen out with her best friend, remains firmly in the friend-zone with her crush and her parents are driving her crazy. One way or another, Elektra's life is now spent waiting for the phone to ring - waiting for callback.

Can an average girl-next-door like Elektra really make it in the world of luvvies and starlets?


*This book was originally called Waiting For Callback, if you were here before and are slightly confused!

My Thoughts:
So I started reading Casting Queen in the midst of my first bout of university exams.  I had been MEGA stressed about these and could never escape the scary thoughts of what the stress was doing to my body and especially how it was affecting my mental health, and I needed to do something to distract myself, literally for my own sanity and well-being.  One night when I couldn't sleep I picked up Casting Queen and it was exactly what I needed.  Something fun, light-hearted and easy to read, and before I knew it I was 100 pages in and loving it (and thinking 'oh no it's 12:30am and I'm really tired but I don't want to stop reading').  It perfectly distracted me from my thoughts as I got lost in Elektra's story, and I loved it.

The book begins with Elektra dressed as a spider, impersonating a carrot onstage.  Yep, you read that right!!  I found this weird (who wouldn't?) but I decided to roll with it - why not, eh?  In the audience is an agent, who goes on to represent Elektra as she begins her career as a young actress.  From here on out the story is of Elekta navigating the scary world of child acting: prepping for auditions, the feeling of failure and disappointment when they are unsuccessful, the waiting, etc.  To top it all off she is also struggling with school, friendships and the emotional baggage that comes with first crushes and relationships.

Elektra's voice is super easy to read and get lost in, and also so authentic.  It's odd how when I started this blog I was younger than all these YA protagonists (I was thirteen, I think?), yet I realised as I was reading Casting Queen that now that I am nineteen, I am four years older than the main character, and older than most of the protagonists that I read about now.  Yet it didn't affect my ability to relate to Elektra, as I think that the feelings and experiences that you have when you are fifteen don't go away just because you're older.  Just because you're older doesn't mean you can't learn from a fifteen year old!  This was just something that I found myself considering as I read, and now more as I am writing this review.

I related mostly to what Elektra was going through with her friendships and school stresses, as these things are still happening to me now, if in a slightly different way: uni rather than school, and a lot of my friends are spread over the country at other unis or still at home.  One of my best friends has just got together with one of her best friends (I'm soooo happy for them) and while I don't at all feel like she's ditched me for him as Elektra does in the book, it was a tiny worry that crept into my head when she told me.  It's a thought I shouldn't have had (sorry if you're reading this, you know who you are) and I think Elektra feels the same- she knows it's silly, yet it's so hard not to listen to the thoughts in your head, no matter what age you are.  So yeah I know since a lot of the readers of my blog probably are adults reading YA I don't need to tell you this but I've done a lot of growing up very quickly in the last few months and it's scary, but it's a comfort to know that some things don't change.

The other major (actually probably the main) part of the book is obviously Elektra's auditions and blossoming career as a young actress.  I've never been interested in drama or acting (drama class at school was my second least favourite, only after PE), but I do like watching films and TV a lot so it was cool to see a little bit about how casting works and the background things that happen so far in advance of a film that you hardly ever or really never think about when you're sitting back and enjoying watching something.  I dunno how realistic they are but they fooled me if they're not!  Haha.  I felt Elektra's frustration right along with her, and found it just as upsetting when she missed out on parts or when things went mega wrong!  I was impressed by how much she didn't let it go to her head and by how mature she was (most of the time!) about it!  I was worried at first that she'd be a brat and while she did have some moments it wasn't over-the-top drama queen (that was all Flissy!) so I didn't mind.

Basically, go read Casting Queen.  It's light-hearted and doesn't take itself too seriously, yet still manages to deal really well with some mature themes.  I am so pleased I chose to read this in the middle of exams too, since it meant that I could easily escape from my own head even for a little while, giving me perspective.  To top it all off there was more than one Chuck Bass reference in there, and any book that acknowledges the existence and perfection of Chuck Bass is one that I want to read ;)  I will definitely be looking out for future books by this mother-daughter duo (and maybe a sequel?! I don't think it needs one necessarily but I definitely would not turn it away!) and you so should too!

*Huge thanks to Simon and Schuster for providing me with a copy of Casting Queen in exchange for an honest review.  In no way has this affected my opinion of the novel.