April 09, 2018
Hello! Welcome to my appreciation post for one of my favourite series - The Illuminae Files! 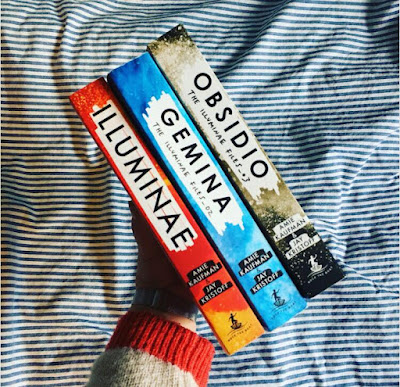 I'm going to try and keep it non-spoilery but be cautious if you've only read Illuminae and/or Gemina.

This morning, Kady thought breaking up with Ezra was the hardest thing she’d have to do.

This afternoon, her planet was invaded.

The year is 2575, and two rival megacorporations are at war over a planet that’s little more than an ice-covered speck at the edge of the universe. Too bad nobody thought to warn the people living on it. With enemy fire raining down on them, Kady and Ezra—who are barely even talking to each other—are forced to fight their way onto one of the evacuating fleet, with an enemy warship in hot pursuit.

But their problems are just getting started. A deadly plague has broken out and is mutating, with terrifying results; the fleet’s AI, which should be protecting them, may actually be their enemy; and nobody in charge will say what’s really going on. As Kady hacks into a tangled web of data to find the truth, it’s clear only one person can help her bring it all to light: the ex-boyfriend she swore she’d never speak to again!

Told through a fascinating dossier of hacked documents—including emails, schematics, military files, IMs, medical reports, interviews, and more—Illuminae is the first book in a heart-stopping, high-octane trilogy about lives interrupted, the price of truth, and the courage of everyday heroes.


Here are five reasons why you should read this series:

1. It's told using mixed media, including transcripts, IM chats, drawings, journal entries, emails, and more.
It's so exciting! Every page is different: one page might be an instant message chat between Kady and Ezra, and the next might be a transcript of some important video footage.  Then there might be an extensive casualty list, followed by a journal entry. It makes for a really interesting reading experience, and even though it sounds like it might be really difficult to follow, it isn't. So original and addictive!

2. The world of Kerenza
The world that Amie and Jay have seemingly effortlessly created is amazing.  The spaceships themselves are properly fleshed out and maps are included throughout so you can really picture them and imagine what's going on inside them.  Then the relations between the ships and the different mega corporations and the intricate politics of the universe is so detailed, and it's amazing that I could take it all in and not get bored or confused. Very impressive!

3. The characters
It's impossible not to love (or hate when appropriate!) the characters. Right from the start you are invested in them and rooting for them to survive, and the way that they're all brought together and interact with each other throughout the series is really clever. Each book focuses on a different pair, however the characters from the previous books are still totally there and making a difference and that's really great. My favourite 'character' brings me onto my next point...

4. AIDAN
AIDAN is the artificial intelligence that is aboard the Kerenza fleet ships. Despite being a machine, he is as much a character as anyone else and he is my absolute favourite. His decisions are so interesting and you never know what he's going to do next, and it's so exciting and he really keeps you on the edge of your seat! His actions bring to mind big questions about AI and technology and the future and it's really quite thought-provoking and also a little scary, haha. Even so I was hooked and couldn't tear my eyes away from the page.

5. It's completely unpredictable
My final point is the story itself - it's so unpredictable and surprising and this makes it unputdownable (it's a word now :P ). From the moment I started Illuminae two summers ago to finishing Obsidio just last week I was 100% invested in the story and the plot and whether they would ever manage to beat BeiTech corporations. I won't give it away but it's so exciting and interesting that it's definitely one of my favourite stories of all time. I will definitely be returning to this series again - and I'm looking forward to picking up smaller details that I missed because it's so detailed and intricate that I'm sure there are many. 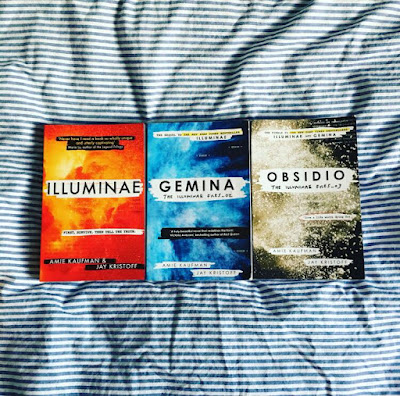 So there we have it! Have you read The Illuminae Files? What did you think? Tweet me or leave me a comment below, I'd love to hear your thoughts about this fab series.

And finally, check back later this week for a review of another fab book set in an exciting futuristic world!